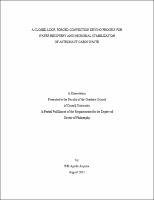 During long-term space missions, astronauts generate wet trash, including food residues, moist hygiene wipes and wet paper towels. This waste produces two problems: first, the loss of water; second, the generation of odors and potential health hazards by microbial growth. These problems are solved by a closed-loop, forced-convection, heat-pump drying system which stops microbial activity by both pasteurization and desiccation, and recovers moisture in a gravity-independent porous media condensing heat exchanger (PMCHX). Detailed transport models were developed for the two major processes involved: drying of the fixed bed of trash and condensation of water vapor in the PMCHX. The conservation equations for mass, energy, and fluid flow were applied to these systems to give a set of differential equations that was solved numerically by the finite element method using the commercial software COMSOL. Simulation values were compared with experimental data to validate the model for various operating conditions at sea-level pressure and unit gravity. The model predicts the system performance, energy use per unit of recovered water, and effectiveness of enthalpy recovery options. This can be used to optimize the performance of the drying system for various space habitat conditions. The energy invested in removing a unit mass of water from the trash increases as the evaporation rate falls toward the end of drying. Knowledge of the lowest water activity at which microorganisms will grow on the waste can be used to specify a minimum drying endpoint. This should ensure the production of microbiologically stable trash for storage without extra energy consumption due to further drying below this moisture content. A real- time PCR-based biomass assay for measuring fungal growth rates on solid media was developed for this purpose. The procedure was used to monitor the biomass of Penicillium chrysogenum, a species commonly involved in food spoilage, during growth on a model food at different water activities (a w = 0.973, 0.936, and 0.843). The specific growth rate of P. chrysogenum was also measured. The results show that growth decreases as water activity is lowered and at a w = 0.843, the P. chrysogenum spores remained dormant. The specificity of the rt-PCR assay was demonstrated by measuring the biomass of P. chrysogenum while growing together with Aspergillus niger on solid media.