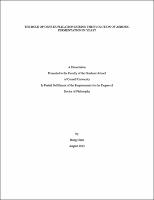 The genetic basis underlying how organisms adapt to different environments and evolve new life style is a central issue of molecular evolution. The evolution of aerobic fermentation in yeasts is one of those good examples. So far the underlying genetic basis of this phenotypic evolution remains unclear. Gene duplication, as a primary source of materials for evolutionary novelties, has long been thought to play an important role in the adaptation of organisms to their environments. It was hypothesized that whole genome duplication (WGD) led to the development of this efficient fermentative life style. However, it remains unclear how the WGD genes are regulated during the switch of energy metabolism, an issue which should be the essence of the "WGD-Fermentation hypothesis". In this study, I first used a genome-wide expression dataset during robust metabolic oscillation in response to oxygen in budding yeast (Tu et al. 2005) to investigate the distribution of WGD genes in metabolic cycle. An enrichment of WGD genes was found underlying the physiological response of S. cerevisiae to oxygen change. Our results provided new evidence for the WGD-Fermentation hypothesis. In the next, I explored in more detail about what were the important WGD genes that contributed greatly to the evolution of aerobic fermentation. Two WGD genes are brought to the front to study this issue due to their importance on regulating energy metabolism. One of the two genes is pyruvate kinase (PYK), and the other is the target of rapamycin (TOR). In both cases, I revealed positive correlations between the copy number of these genes and the strength of aerobic fermentation on a yeast phylogenetic tree, which implies that gene duplication events of PYK and TOR are possible to facilitate the evolution of aerobic fermentation. In the PYK experiment, I found that yeasts with higher capabilities on the allosteric regulation of PYK tend to have higher fermentation abilities. I then assumed that the strengthened allosteric regulation of PYK after gene duplication might be important in the development of fermentation lifestyle in yeast. Further study on T403E mutant which is defect in allosteric regulation on PYK supported this assumption, as T403E mutant showed raised oxidative phosphorylation and decreased fermentation rate compared with the control. In the TOR experiment, I mimicked the TOR gene duplication during yeast history and doubled the TOR gene in a Crabtree-negative yeast K.lactis. I observed that the fermentation ratio in the doubled TOR mutant was significantly increased compared with the control, which supported that TOR gene duplication contributed greatly to the evolution of fermentative life style. In the view of the similar features shared by fermenting yeast and cancer cells on aerobic fermentation, our studies on PYK and TOR may shed lights on the mechanism how the Warburg effect is regulated in tumor cells.