Essays On Family Demography, Household Finance, And Economics Of The Family 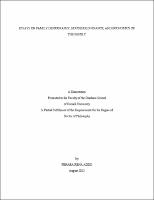 This dissertation examines the intersection of financial resources, family demography and economic wellbeing of American households at transitional periods in the life course. Changes in union formation, the demographic composition of the population, and family structure since the latter part of the twentieth century have challenged existing theories on household formation, individual decision-making, and economic well-being (Bumpass, 1990). With the increase in woman's labor force participation, the rise of cohabitation, pre-marital childbirth, and single-parent households, conventional models used to explain recent trends in marriage market dynamics, intra-household resource allocation, and wealth inequality are continuously tested, challenged, and revamped to keep pace with a society in a current state of demographic and economic flux. Chapter one focuses on early and young adulthood and the role of consumer and education loan debt in transitioning into coresidential relationships using a sample of youth coming of age at the turn of the twenty-first century and during a period of economic expansion, increased college enrollment and growing socioeconomic divide in marital patterns in the United States. Results suggest total debt amount is associated with cohabitation, increasing the odds of cohabitation over marriage and remaining single for both women and men. First marriage is positively associated with greater educational attainment for this cohort of young adults, but women with education loan debt are more likely to delay marrying and cohabit first. Chapter two (co-authored with Daniel T. Lichter) addresses the racial wealth gap by exploring the relationship between marriage and marital histories on wealth accumulation of older Black and White women. Marital and relationship histories are strongly associated with the wealth accumulation process. Women who marry and stay married accumulated levels of wealth that exceeded those of other women with disrupted family lives. The marriage-wealth nexus is sensitive to a women's position in the wealth distribution, and decomposition analyses highlight the non-trivial role of racial disparities in marital histories in accounting for the racial wealth gap. The third and final chapter uses seven waves of individual-level data from the Health and Retirement Survey from 1998-2008 to analyze whether there is a causal effect of being an informal basic needs or financial caregiver to an aging parent on one's health outcomes (self-assessed health and depression) and health behaviors (exercise and smoking). The results suggest a positive effect on depressive symptoms of basic needs caregiving for unmarried adult children, and that they may be selecting into that role because of their poor health. Manifestations of caregiving in future periods include, basic needs caregiving increasing the probability of smoking for married women and financial caregiving increases depressive symptoms for unmarried men. These findings suggest that the financial costs of caregiving can influence adult children's health outcomes, in particular for those not currently in a marital union. Bumpass, L. (1990) What's happening to the family? Interactions between demographic and institutional change. Demography. 27(4):483-498.