Statecraft On The Margins: Drama, Poetry, And The Civilizing Mission In Eighteenth-Century Southern Vietnam 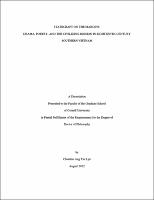 In the eighteenth century, the Mekong delta was a site of interaction between an expansionary Vietnamese kingdom and a network of dispersed Chinese Ming loyalists. This dissertation investigates the ways in which eighteenth-century Vietnamese and Chinese literati shaped the cultural landscape of the Mekong delta. It demonstrates the importance of the intellectual and cultural inhabitation of space for the appropriation of frontier lands. Specifically, it considers the literary works of Nguy n Cư Trinh (1716-1767), a prominent southern Vietnamese scholar-official, and M c Thiên T (1710-1780), the leader of Hà Tiên, an autonomously governed ethnic Chinese enclave in the Mekong delta. The first part of this dissertation examines a satirical play, Sãi Vãi (Monk and Nun), which Nguy n Cư Trinh composed in 1750 to encourage the people of Qu ng Ngãi to fight the á Vách (Stone Wall) uplanders. The play reveals how Nguy n Cư Trinh's attempt to stabilize the Vietnamese kingdom's borders was intimately related to his attempt to educate the Vi t inhabitants of the frontier. Moreover, the play shows the extent to which Sino-Vietnamese literary culture formed a part of the Vietnamese cultural consciousness on the frontier during this period. The second part of this dissertation is dedicated to a study of the Ten Songs of Hà Tiên, a collaborative literary project that M c Thiên T organized. The landscape poetry served as a medium through which the originator of the project rendered his domain civilized and brought it into the cultured discourse of Chinese intellectuals. A comparison of the landscape poems of both M c Thiên T and Nguy n Cư Trinh, moreover, provides insight into the divergent nature of the Chinese and Vietnamese projects on the frontier. The patterns of migration that led the two authors to the Mekong delta informed the cultural production of knowledge in the region; and this knowledge, in turn, was integral to the literati's attempts to shape statecraft on a rapidly changing frontier.