The Effect Of Interface Structure On All-Organic Thin Film Growth Morphology: A Computational Analysis Of C60 On Pentacene. 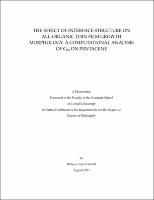 The C60 /pentacene heterojunction is of considerable interest for organic electronic devices (especially for photovoltaic applications), yet its nature, particularly its structural morphology, is not well characterized at the molecular level. With that in mind, this work presents the results of both fully atomistic Molecular Dynamics and kinetic Monte Carlo approaches to elucidate the behavior of C60 molecules on a variety of different pentacene polymorphs. The diffusion characteristics of C60 molecules on the surfaces of "thin film" and "bulk" phases of pentacene (upright polymorphs) are analyzed in detail. The results highlight surprising differences between the two polymorphs, with lower diffusion coefficients (by one half) and anisotropic diffusion behavior, sometimes nonArrhenian, of C60 on bulk phase pentacene, compared to the thin film phase. An extensive catalog of energetic barriers for diffusion created from the Molecular Dynamics simulations was used as the sole input into a kinetic Monte Carlo simulation in order to follow the evolution of multiple layers of C60 on pentacene for time scales approaching a millisecond that are unattainable using Molecular Dynamics alone. A novel kinetic Monte Carlo algorithm was developed for this purpose, featuring a multi-lattice set-up to capture the behavior of singleton and non-singleton C60 molecules diffusing, clustering and reorganizing as monolayers on the surface. For recumbent pentacene polymorphs, in which the molecules are essentially lying almost flat on an underlying silicon surface, Molecular Dynamics was revisited to elucidate the tendency for C60 nanowires to persist in the crevasses formed by these tilted pentacene structures. We find that the likelihood for C60 nanowires to be formed and to persist depends sensitively on the angle that the recumbent pentacene makes with the surface normal, the amount of initial tensile strain applied to the nanowire, and the presence of surface step edges. The most compelling finding was that pentacene step edges, which would result from any appreciable surface roughness and will be a common experimental occurrence, strongly enhances the likelihood of nanowire formation due to the strong binding energy of C60 molecules to step edges.