On The Complexity Of Mathematical Problems: Medvedev Degrees And Reverse Mathematics 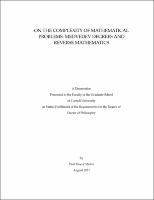