Theatron Perceived: The Seen, The Unseen, And The Seers In Greek Tragedy 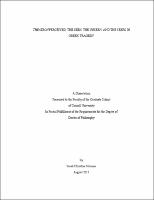 What if the ornate purple fabric in Agamemnon was not on stage at all? What if the cataclysm at the end of Prometheus Bound was not staged? This dissertation argues that ancient Greek tragedy demanded an active, imaginative engagement from the audience in order to create theatrically real props and action that may not have been visible on the stage. Drawing on philosophical texts as well as key tragedies, including Sophocles' Philoctetes, Aeschylus' Seven against Thebes and Prometheus Bound, and Euripides' Heracles and Hippolytus, this study further shows that seeing was itself understood as a powerful force, almost a physical touch between seer and seen object, and that this understanding is a crucial concept behind ancient anxieties about the powers and dangers of theatrical spectatorship. Chapter 2 delineates the major functions of props in Greek tragedy, ultimately proposing that the unique functions of props do not always demand the presence of a visible prop on stage. Instead, some may have been theatrically real yet physically absent, too small to see, or very abstract. These objects, "rhetoricized props," emerge through the language of the play, dramatic context, actors' gestures, and imaginations of the spectators, which collaborate to create the theatrical reality of the props. Chapter 3 builds on the idea of rhetoricized props to approach action that takes place on stage but that seems too unwieldy to have been represented fully with ancient stagecraft. Several key scenes yield a range of techniques that serve as indicators to the spectators of what is happening and how they should imagine it, even if they cannot see it. Chapter 4 explores ancient philosophical texts that attempt to explain the mechanics of perception. The Greeks seem to have understood vision as involving a close connection between seer and seen, and this serves as framework for understanding tragic scenes in which characters cover themselves or others to avoid being seen. If one can become polluted by simply seeing a polluted person, such as Heracles after he has murdered his family, what might that mean for those who watch theatrical performances?