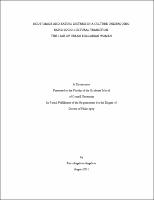 In Bulgaria-a former Eastern Bloc state rapidly transitioning to democracy-the incidence of eating disorders seems to be on the rise. The emergence of eating disorders in transitional cultures is often seen as a reaction to the spread of the Western thinnessobsessed culture-a culture-reactive behavior. However not all women with disordered eating are motivated by a desire for thinness; rather, motivations for dietary restraint may be culture-specific. Culture-reactive and culture-specific factors affecting restrictive dietary behaviors were explored in a population recently exposed to the Western thin ideal. A survey sample of 205 women ages 18-81 in Sofia, Bulgaria, concerning their Western media consumption, adoption of the thin-beauty ideal, body image dissatisfaction, engagement in dietary restraint behaviors (dieting and fasting), and having faith, defined as not being either atheist or agnostic. CART analysis was used to uncover factors influencing dietary restraint. Grounded theory was used to analyze interviews with 13 women to deepen the understanding of fasting behavior. Disordered eating (EAT-40) scores predicted thin-ideal awareness and internalization, and dietary restraint (all p<0.05), but not body dissatisfaction. Women with higher body dissatisfaction exhibited higher dietary restraint (p<0.05). Exposure to Western media was weakly related to awareness and internalization, suggesting that the media influence was filtered through local cultural norms. Dietary restraint-dieting and/or fasting-correlated positively with faith (p<0.05). Qualitative analyses showed that fasting was linked to an overwhelming desire to attain physical purity and health. Weight control was seen only as a consequence of bodily purification. In sum, Western media influences explain some, but not all, body image and eating problems in this sample. Faith seemed to affect dietary restraint via a culturespecific pathway. Fasting was universally accepted as a healthy and morally superior dietary behavior when compared to regular dieting. Fasting is a form of dietary restraint that differs from regular dieting only in its motivation. If taken to an extreme, fasting may present with the clinical consequences of a Western style eating disorder. This idea requires further investigation: if corroborated, it could have implications for the way eating pathology is diagnosed, treated, or prevented in Bulgarian populations.