The Newsletter of the Department of Chemistry and Chemical Biology at Cornell University Number 4, August 1969 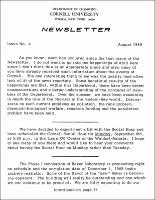 As you know, much has occurred since the last issue of the Newsletter. I do not want to go into the happenings of April here since I don't think this is an appropriate place and also many of you have already received much information about the events at Cornell. The one interesting thing to me was the quality (and often lack of it) of the news reporting. Some beneficial results of the happenings are that, within this Department, there have been better communications and a better understanding of the concerns of members of the Department. Over the summer, we have been examining in depth the role of the chemist in the modern-day world. Discussions on such current problems as pollution, the race problem, chemical-biological warfare, research funding and the population problem have been held.