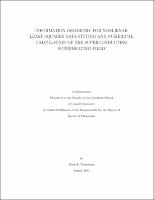 This thesis consist of two parts, each of which consist of two chapters. First we explore the information geometric properties of least squares data fitting, particularly for so-called "sloppy" models. Second we describe a calculation of the superconducting superheating field, relevant for advancing gradients in particle accelerator resonance cavities. Parameter estimation by nonlinear least squares minimization is a ubiquitous problem that has an elegant geometric interpretation: all possible parameter values induce a manifold embedded within the space of data. The minimization problem is then to find the point on the manifold closest to the data. By interpreting nonlinear models as a generalized interpolation scheme, we find that the manifolds of many models, known as sloppy models, have boundaries and that their widths form a hierarchy. We describe this universal structure as a hyper-ribbon. The hyper-ribbon structure explains many of the difficulties associated with fitting nonlinear models and suggests improvements to standard algorithms. We add a "geodesic acceleration" correction to the standard Levenberg-Marquardt algorithm and observe a dramatic increase in success rate and convergence speed on many fitting problems. We study the superheating field of a bulk superconductor within the GinzburgLandau, which is valid only near Tc , and Eilenberger theory, which is valid at all temperatures. We calculate as functions of both the Ginzburg-Landau parameter [kappa] and reduced temperature t = T /Tc the superheating field Hsh and the critical momentum kc describing the wavelength of the unstable perturbations to flux penetration. By mapping the two-dimensional linear stability theory into a one-dimensional eigenfunction problem for a linear operator, we solve the problem numerically. Within the Ginzburg-Landau theory, We demonstrate agreement between the numerics and analytics, and show convergence to the known results at both small and large [kappa]. Within the Eilenberger theory we demonstrate agreement with the results of Ginzburg-Landau theory near Tc , but find discrepancies with the temperature-dependent results for large [kappa]. We speculate that this discrepancy is due to a lack of convergence at low temperatures due to small length scales of the perturbations analogous to the small length scales associated with the vortex cores of the mixed state.