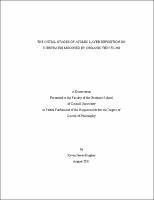 Atomic layer deposition (ALD) provides the ability to deposit highly conformal thin films with essentially molecular level control over film thickness. These characteristics have made it an active area of research for a number of applications, notably in the field of semiconductor devices. The focus of the work presented here is on the initial stages of film growth, including the first interaction of gas phase ALD precursors with the substrate, and the period in which the growing surface transitions from the starting substrate to the steady-state growing film. Of particular interest are substrates modified using thin organic films. These organic films are used to alter the identity, density and spatial extent of functional groups on the surface. We begin with a review of the prior work in this area, focusing on the ALD of TiNx on a variety of organic films, including self-assembled monolayers with various endgroup chemistries, and branched films with a more 3-d distribution of functional groups. Here connections are observed between the initial interactions of the gas phase precursors with the organic film, and the subsequent stages of ALD growth. A relationship between the initial rate of ALD growth and the resulting film morphology is also observed, and can be explained by a variation in nucleation site density due to the structure of the organic film. The next section involves the ALD of a range of materials (Al2O3, HfO2, Ta2O5, and TaNx), on a single organic layer, branched poly(ethylene imine) (PEI). Here, the presence of the organic layer causes an attenuation in the amount of material deposited per ALD cycle in the initial stages of growth. A strong correlation was found between the thermodynamic driving force of the ALD reaction and the degree of attenuation, suggesting that ALD processes in which there is a strong driving force (or low activation energy) for the formation of the final products can more easily overcome the obstacles presented by the organic layer. The ALD of one material, TaNx, was examined in more detail using in situ XPS. Substrates in this study included nonporous SiO2, a porous low dielectric constant or 'low-[kappa]' material, and both substrates modified by PEI films. PEI was used here in part because of the tendency of smaller molecules to infiltrate and deposit within the pore network of the low-[kappa]. The chemical structure of the chemisorbed tantalum precursor, Ta[N(CH3)2]5, after the first cycle of ALD, as well as the oxidation state and chemical composition of the TaNx film in the first 10 cycles (~ 610 Å) were strongly affected by the starting substrate. Substrates with a high density of oxygen containing groups led to a more oxidized TaNx film, and less efficient incorporation of N in a nitride binding state. Furthermore, the presence of a PEI film enhanced the growth of TaNx at the surface of the porous low-[kappa], and limited infiltration of the pore network by the gas phase ALD precursors. A final set of experiments involved the early stages of cobalt film formation on tantalum substrates using chemical vapor deposition with the metalorganic precursor dicobalt hexacarbonyl tert-butylacetylene (CCTBA). Here it was found that growth proceeded in two phases. The first involved the formation of an intermixed cobalt/tantalum layer, while the second took place after the intermixed layer was covered and was characterized by the formation of a mixed carbon/cobalt film.