Sources Of Synergy In Mergers And Acquisitions 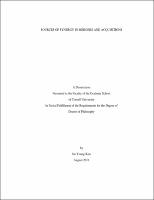 The general findings of the merger literature have raised the question of why mergers continue to be so prevalent when there is no conclusive evidence of value gains. In particular, the zero or even negative stock price reaction of the acquirer firm surrounding the announcement has been puzzling. In order to provide insight into this apparent contradiction, this study examines the sources and the realization of synergistic gains from mergers and acquisitions more directly. Prior studies on the sources of synergy have not been very effective since the nature of the data may have obscured the true economic impact of mergers. Using the rich information gained from the U.S. hotel industry data from 1991 to 2009, this study investigates the sources of merger-related gains while controlling for the market condition. Along the way, the much-neglected area of value erosion from M&amp;A is also addressed. The findings indicate that at the hotel property level, both the target and the acquirer show significant cost savings; target hotel properties achieve price gains when they are merged into similar brand families of the acquirer; acquirer hotel properties gain occupancy improvements from the demand spillover from the target hotel properties. The study also finds that local market conflicts have a negative impact on the revenue of both target and acquirer properties. No evidence was found for price-increasing collusion among the properties of the target and the acquirer. The investigation of the offer premium and the operating performance shows that the offer premium is positively associated with synergistic gains for the acquirer properties while it is non-significant for the target properties. These results suggest an interesting possibility that the premium may actually be a price to gain control over the target's resources, which is critical to generating value on the acquirer side.