Tissue Transglutaminase And Its Role In Human Cancer Progression 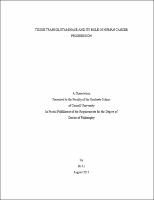 Tissue transglutaminase (tTG) is a protein-crosslinking enzyme whose expression is up-regulated in several human cancers. Here I show that tTG is a key participant in a novel EGFR/Src-signaling pathway and a potential target for inhibiting EGFR-promoted tumor progression. Specifically, EGF up-regulates tTG expression in human breast cancer cells, and knock-downs of tTG expression or the treatment of breast cancer cells with a tTG-specific inhibitor, blocks EGF-stimulated anchorageindependent growth. The combined actions of Ras and Cdc42, lead to the activation of PI 3-kinase and NF[kappa]B, mediating the EGF-dependent up-regulation of tTG in breast cancer cells. Moreover, overexpression of wild-type tTG in these cancer cells, but not its enzymatically-defective counterpart, fully mimics the actions of EGF. Surprisingly, the tTG-promoted growth of breast cancer cells is dependent on its ability to activate Src, as an outcome of a complex formed between tTG and the breast cancer marker and intermediate filament protein keratin-19. Microvesicles (MVs) derived from human cancer cells are receiving a good deal of attention because of their ability to participate in the transfer of signaling proteins between cancer cells and to contribute to their invasive activity. Here I show that MVs may play another important role in promoting oncogenesis, as MVs shed by two different human cancer cells, MDAMB231 breast cancer cells and U87 glioblastoma cells, are capable of conferring transformed characteristics onto normal cells. I further show that tTG crosslinks fibronectin in MVs derived from cancer cells and that the ensuing MV-mediated transfer of both crosslinked-fibronectin and tTG to recipient cells function cooperatively to induce their transformation. This new role for MVs in cancer progression led to my investigating the signaling pathways that induce MV formation in cancer cells. These efforts resulted in the identification of a RhoAROCK-LIMK signaling pathway that plays a critical role in directing the biogenesis of MVs in cancer cells.