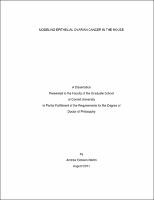 For over five decades epithelial ovarian cancer (EOC) is identified as the leading cause of death from gynecological malignancies in the USA. Unfortunately, due to latent progression of EOC and lack of accurate animal models studies of this disease's pathogenesis have been challenging. Not surprisingly, establishment of adequate screening tests for early disease stages, at which point the cancer would be curable, and advances in treatment approaches have been slow. Deficiency of tumor suppressor genes p53 and RB and overexpression of c-MYC oncogene occur frequently in the most common form of sporadic EOC, high grade serous adenocarcinoma. Thus, we have initiated development of several mouse models of EOC based on alterations of these genes in the presumed EOC tissue of origin, the ovarian surface e pithelium (OSE). By using a new approach of in situ targeting of OSE we have demonstrated that disruption of p53 and Rb leads to high grade serous adenocarcinoma. We have also established new models of EOC intraperitoneal spreading and have shown that c-MYC promotes tumorigenicity of p53-and p53/Rb-deficient OSE. Next, we have shown that multiphoton microscopy and second harmonic generation (MPM/SHG) imaging are well suited for studies of cell motility in vivo and can complement pathological characterization EOC by allowing optical biopsies of native human and mouse tissues at resolution comparable to that of routinely processed histological sections. We have also shown the feasibility of laparoscopic MPM/SHG. Moreover, we identified layered nanohybrids as suitable particles for combination of intravital biomedical imaging with controlled drug release. As the first step to determine whether EOC arises from the stem cell compartment we have identified an OSE subpopulation which is positive for stem cell marker aldehyde dehydrogenase 1, efficiently forms clonogenic spheres and displays extended self-renewal properties in serial sphere generation assays. These putative OSE stem cells are slow cycling according to BrdU label retention assays and are mainly located in the hilum area of the mouse ovary. These findings will direct our future search for better approaches to target EOC cells with stem cell properties.