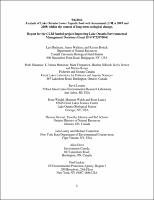 Lake Ontario is the 13th largest lake in the world with a surface area of 18,500 km² (Reynolds et al. 2000), has a population in the watershed of over 8 million, and provides a range of ecosystem services to the people in the watershed (freshwater for various uses, shipping, fisheries, and recreation). Currently, extensive surveys for each Great Lake occur on a rotating five-year schedule. This report presents the status of Lake Ontario’s lower trophic levels in 2008 and a detailed comparison with similarly collected in 2003 and with data collected by the collaborating agencies and Cornell University and discuss observed changes in relation to changes in nutrient concentration and food web configuration in Lake Ontario. There has been a spatial restructuring of the Lake Ontario offshore ecosystem through the increase in the deep chlorophyll layer and associated zooplankton. This has resulted in a Lake Ontario that in 2008 is more similar to Lakes Superior, Huron and Michigan than to the Lake Ontario of the 1990s. Major findings are Nutrients: Spring offshore total phosphorus and soluble reactive phosphorus increased from 2003 to 2008, but summer levels did not. Lake-wide average total phosphorus levels remained at or below the target level of 10 µg/L in all three seasons of 2008. Lake-wide nutrient concentrations have declined since the 1960s. However, phosphorus concentrations have been stable (~7-10 µg/L) since the mid-1990s. Spring silica was similar in 2003 and 2008 and was depleted by the summer in both years. This indicates continued spring diatom production in Lake Ontario. Phytoplankton: Summer epilimnetic chlorophyll-a increased by a factor of 2, the proportion of autotrophic algae increased, and summer water clarity declined from 2003 to 2008. Summer chlorophyll-a levels in 2008 were similar to the concentrations in the 1981-1995 time period. However, the trend towards mesotrophy in the summer of 2008 may be limited to that year as it was not followed by increased values in 2009 to 2011. Most of the chlorophyll in the water column was located in a deep chlorophyll layer in the thermocline. Zooplankton: Offshore epilimnetic zooplankton density and biomass declined from 2003 to 2008 by a factor of 5 to 12 in the summer and by a factor of 1.5 to 2.6 in the fall. This is consistent with long-term trends of declining epilimnetic zooplankton abundance including a larger decline in 2004-2005 coincident with an increase in the predatory Bythotrephes. Whole water column zooplankton density also declined from 2003 to 2008 in the summer and fall, but zooplankton biomass only declined in the fall. Large changes in whole water column zooplankton community composition occurred between 2003 and 2008 from a cyclopoid/bosminid dominated system in 2003 to a calanoid dominated system in 2008. Mysids, Diporeia and Mussels Mysid densities were similar in 2003 and 2008 indicating continued high biomass of mysids in Lake Ontario. In July of 2008, the biomass of Mysis diluviana was 17% of the crustacean zooplankton biomass in the offshore of Lake Ontario (depth >30m). Mysid densities appear stable in Lake Ontario. The native benthic amphipod Diporeia declined further in 2008 and is almost extirpated from Lake Ontario. Quagga mussels are very abundant as deep as 90 m, but populations in shallow water declined from 2003 to 2008. Few zebra mussels were present in either 2003 or 2008.