SEGREGATION OF A BINARY MIXTURE OF GRANULAR PARTICLES 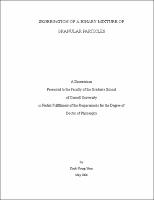 Kinetic theory for a binary mixture of slightly inelastic particles, based on Maxwellian velocity distribution with corrections due to high density, is used to predict segregation of a binary mixture with species differing in sizes and material densities. The relative mean species velocities indicates segregation for a mixture uniformly agitated under gravity. Molecular dynamics simulations of elastic hard spheres and physical experiments with inelastic spheres in a cylindrical container vibrated at high normalized acceleration support this prediction. An analysis for a non-uniformly agitated mixture under gravity provides a general criterion for segregation. We establish the validity of equipartition assumption in this problem. Then, we introduce kinetic theory for mono-disperse disks with a friction model differentiating sticking and sliding collisions and derive a simple way of incorporating friction into theory with effective normal restitution coefficient. We linearize Revised Enskog Theory for a binary mixture of dsks with small differences in sizes and masses. By solving a boundary value problem of the mixture sheared between two bumpy circular cells, we provide experimenters a concrete way of testing the theory. We then compare dense Maxwellian theory, from the first problem, with Revised Enskog Theory to see differences and their consequences on the prediction of segregation. In the absence of temperature gradient, with gravity present, they yield similar predictions. However, in the presence of temperature gradient, with gravity absent, they only agree at high volume fractions. Then, we describe a steady fully-developed flow on a bumpy incline, with a kinetic theory for mono-disperse spheres. We test the theory by attempting to reproduce three features of inclined flows from physical experiments and numerical simulations. On failing this, we describe modifications that may salvage the core of the theory with a few assumptions. A chain theory is introduced as a promising modification. With the solutions of the chain theory, we predict segregation on an inclined plane using Revised Enskog Theory. Using density profiles for various sizes and material densities in the mixture, we compare its prediction with the prediction based on dense Maxwellian in the first problem and find that the agreement is good.