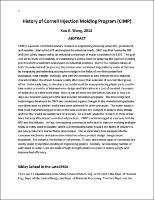 CIMP is a pioneer of interdisciplinary research in engineering involving university, government, and industry. Started in 1974 and inspired by industrial needs, CIMP was first funded by NSF and then jointly supported by an industrial consortium of major corporations in 1978. The goal was set to study the feasibility of establishing a science base for analyzing the injection molding process which would have real impact on industrial practices. Due to the complex nature of both the material and the process, the mission was considered impossible by many at the time. By integrating and extending existing knowledge in the fields of non-Newtonian fluid mechanics, heat transfer, rheology, and with the invention of new instruments for material characterization, the dream became reality after more than a decade of concentrated group effort. In the early days, to develop a successful mold for mass-producing plastic parts used to take weeks or months of trial-and-error design and fabrication at a cost of hundred thousands of dollars for so-called mold trials. Now, it can be done not only better, but also in hours or days on computers using powerful and accurate simulation programs. The knowledge and technologies developed by CIMP are considered a game changer in the manufacturing industry overall because no similar results have been achieved for other processes. The main reason is that most manufacturing processes in the real world are too complex to analyze theoretically and thereby results are usually lack of accuracy. As a result, academic research in these areas have had very little impact on industrial practices. CIMP is acknowledged as a success both by NSF and the industry. In fact, the resulting commercial software for injection molding available today is widely used in industry, and it is a contributing factor toward the ability of industry to put new products to market faster and cheaper. This is particularly true as applied to the consumer electronics and automotive industries where product design changes more frequently. For instance, the bodies of cell phones, TV sets, and various types of computers are mostly made by injection molding of engineering plastics. Similarly, an increasing number of parts used in today's cars are made of high strength plastics in order to reduce weight and improve fuel efficiency.