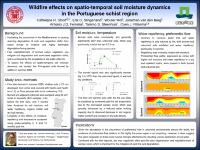 Increasing fire occurrence in the Mediterranean is causing alarming degradation of soils and vegetation shifts from native shrubs to invasive and highly flammable degradation-loving species. Fast reestablishment of burned native vegetation can mitigate soil degradation and associated vegetation shifts, and is enhanced by the availability of soil water after fire. We studied the spatio-temporal dynamics of soil moisture distribution in five Portuguese soils affected by wildfire in summer 2008. Burned and adjacent unburned soils were sampled in transects 2-11 days and 6 months post-fire. Samples were taken using 50 cm3 soil cores in transects (8x3 samples) and analyzed for soil moisture, water repellency, organic matter content and bulk density. Additional sampling 3, 4 and 14 months post-fire assessed the longevity of fire effects on topsoil moisture, repellency, and temperature. Results show that burned soils were consistently drier and warmer than unburned soils, which was particularly true for the top 0-2.5 cm. In addition, contrary to common belief that soil water repellency is only induced by fire, both burned and unburned soils exhibited soil water repellency, particularly in summer. Preferential flow paths, expressed as zones with higher soil moisture and lower repellency in a dry and repellent matrix, were likewise present in both burned and unburned soil. The drier and warmer soils after the fire can likely be explained by increased post-fire soil evaporation due to the decreased canopy cover, which was possibly enhanced by a reduced water holding capacity due to observed decrease in soil organic matter content and increase in dry bulk density. Given the abundance in the occurrence of preferential flow in unburned environments around the world, the existence of preferential flow patterns in this highly fire prone region is not surprising. However, it does suggest that plant (re)growth on these soils may be strongly affected by the resulting uneven distribution of soil water. Combined with the drier topsoils, this may negatively affect post-fire plant regeneration and reestablishment of canopy cover, which is important for the mitigation of post-fire land degradation.