A biography of and interview with Edward Hagyard Fallon 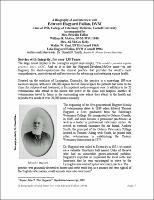 A biography of and interview about Fallon Edward Hagyard  [PDF]   (432.2Kb)

When Edward Hagyard Fallon received his DVM in 1956, he joined the practice in Lexington, KY, now known as Hagyard Equine Medical Institute. He is the fourth in a line of family veterinarians that dates to 1876 when a Scottish-educated veterinarian named Edward Thomas Hagyard was called to Kentucky to consult on a valuable Shorthorn bull. An equine practice (institute) of world renown grew from that original encounter. Hagyard’s three sons were all graduates of the Ontario Veterinary College and worked either in the Lexington practice or in Nashville, Tennessee. Third-generation Charles Edward Hagyard (O.V.C. 1924) joined the practice following his graduation from the O.V.C. in 1924, and about 15 years later, Arthur Davidson (Iowa State University 1936) and William McGee (Washington State University 1940) completed the troika of partners for what for decades became known simply as Hagyard-Davidson-McGee. The son of Charlie Hagyard’s sister was Edward Fallon who studied at Cornell, as did Edward’s son, Luke Hagyard Fallon, the fifth generation equine veterinarian who received his DVM in 1996. The present interview includes not only Drs. Edward and Luke Fallon, but also Edward’s wife, Priscilla, William McGee and his granddaughter, Ali McGee Kelly, and Dr. Walter W. Zent ’63.