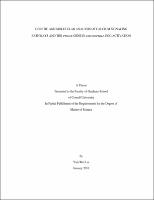 Egg activation, the transition of mature oocytes into developing embryos, is initiated by different external signals in different animals. The signals include sperm entry, mechanical stimuli and pH changes. Although these signals are different, one response to those signals is well conserved: an increase of intracellular calcium (Ca2+) level in the eggs. However, little is known about the molecular pathway downstream of the calcium rise that makes up egg activation. Egg activation in Drosophila requires Ca2+ signaling. Horner (2006) and Takeo et al. (2006) showed that sra, a regulator of calcineurin (CN), has many defects in Drosophila egg activation. To dissect the role of CN further, I characterized the phenotypes of eggs laid by female expressing a constitutively-active CN (CnAact) in Drosophila female germline. I have found that, both cell cycle resumption and MAPK dephosphoreylation are affected, although egg shell hardening and polyadenylation appears normal. This indicates that different events of egg activation may be controlled separately. Because CN is a major transducer of calcium signal that is known to be regulated by calmodulin (CaM), I chose to examine CaM and another major target of CaM that can be important for Drosophila egg activation: Ca2+/Calmodulin-dependent protein kinase II (CamKII). Using transgenic expressed inhibitory peptides, I sought to inactivate functions of CaM and CamKII. However, I did not detect any effect on the hatchability of those inhibitory lines. There are several explanations. One possibility is that Ca2+ triggered egg activation events might not act through CaM-CamKII pathway or there are other regulators/molecular pathways that compensate for their functions. Alternatively, inhibitor peptides were expressed, but they may not have been present in sufficient amounts to inhibit their targets. To understand the upstream regulator genes that control Drosophila activation, I began characterizing prage (prg) gene. Prg mutant females lay eggs, but those eggs fail to destabilize maternal transcripts and never hatch (Tadros et al., 2003). These phenotypes indicate that prg may play a role in Drosophila egg activation. Thus, I examined egg activation phenotypes in oocytes and embryos from prg mutant females. I showed that VM cross-linking did not occur normally in embryos produced by both prg mutant alleles (prg16A and prg32). To find chromosome position of prg gene, Jun Cui previously conducted complementation analysis and DNA sequencing. His data suspected that CG14801, a possible exonuclease, is prg gene. In this thesis, I confirmed that CG14801 corresponds to prg. I assayed expression pattern of prg transcripts. The result shows that prg is expressed in adult of both sexes and the expression increases throughout embryogenesis. In summary, my goal of this thesis is to identify the pathways through which calcium signal is transduced into egg activation in Drosophila and to determine the molecular targets and genes that involve in the pathway.