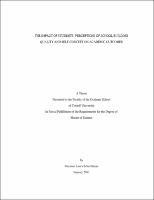 There have been numerous studies focusing on the impact of school environments on student outcomes, particularly academic achievement. Yet while much of the research literature has tried to solidify the connection between building condition and achievement, few studies have attempted to uncover the exact mechanism through which this relationship exists and the other variables that may play a role in this relationship. The current study examines the way in which students‟ perceptions of school building quality and self-concept impact academic outcomes, including absenteeism and scholastic achievement. Twenty-two students were interviewed about their perceptions of the quality of their school building and whether or not the building enabled each of them to achieve academically. Additionally, the students answered questions about their self-efficacy and worth, both generally and within the domain of scholastic achievement. Attendance records, classroom grades from four main subjects, and standardized mathematics and science test scores were obtained for each participant and analyzed alongside findings from the student interviews. Students‟ perceptions of safety within the school building predicted their beliefs about their ability to achieve academically. Additionally, students‟ perceptions of the building‟s ability to support their academic needs significantly predicted classroom grades, and marginally predicted standardized test scores and a measure of self-concept in the domain of scholastic competence. While self-concept did not mediate the relationship between perceived building quality and academic outcomes, it did moderate the relationship between perceived safety and student absenteeism. The results of this study have important implications for education policy and for the design of more appropriate, supportive learning environments. Despite the small sample size, the findings point to notable within-school differences and highlight the value of eliciting student feedback in order to better understand the needs and perceptions of the largest population of school building users.