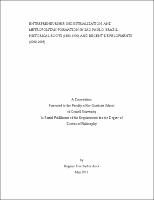 The utmost goal of this dissertation is to explore the entrepreneurial movements that have paved the way for the industrialization of São Paulo. The persistence of manufacturing sectors as anchors of socio-economic development in the metropolitan region of São Paulo (MRSP) is historically rooted in the emergence of coffee as the main export product in the state of São Paulo on the eve of the twentieth century. On the one hand, the industrial tradition of the MRSP was engendered by the infusion of an entrepreneurial mentality into the economy by the most prominent coffee planters of Western São Paulo. The genesis of Brazilian industrialization is a consequence of the capitalist orientation of coffee planters in Western São Paulo who sought to expand their sources of income by investing the surpluses of the coffee economy in other sectors of the economy, including manufacturing. The thriving coffee economy in São Paulo provided economic agents with entrepreneurial opportunities outside the export-led sector of the economy. On the other hand, the new combinations in the economic circuit which are conductive to economic development are partially organized in the political sphere. The roots of metropolitan formation in the state of São Paulo came into light as a consequence of a politicized capitalism in Brazil; in other words, the protection of the income of the export-led sector in the policy arena guaranteed the capital surpluses for investments in manufacturing, thereby creating seminal economies of agglomeration around the city of São Paulo. Furthermore, one of the core ideas pervading this dissertation is that entrepreneurship has a spatial dimension as economic actors expand the scope of capitalist accumulation by recombining the geographical architectures of the economy. In light of the historical roots of industrialization - enmeshed in entrepreneurship in its economic, political and spatial dimensions - the MRSP is nowadays strongly oriented to manufacturing production. The empirical evidence in this dissertation will reveal that the patterns of industrial location in São Paulo have been far from showing an inevitable decadence of manufacturing in the MRSP, which accounts for a substantial share of manufacturing production in the state.