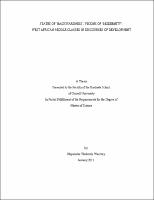 African development has long been described as behind or below that of 'advanced', 'First World', industrialized nations. Consequently, discourses of African progress from colonialism to the present have focused on transforming African societies from 'backwardness' and ubiquitous poverty to more prosperous, 'modern' conditions. African societies are generally understood as dichotomously configured between elites and impoverished masses. As a result, contemporary African development is aimed primarily at policing wanton elites and providing for the precarious poor. While both these objectives are worthwhile, they create a limited representation of African societies; one focused exclusively on extremes. The existence and experiences of African middle classes are largely ignored. Recently, however, reports have signaled the emergence of an African 'middle class' and forecasted its positive impact on development. This thesis investigates a particular subset of West African middle classes in development discourses at the end of empire. I argue for the longstanding existence of modern African middle classes in West Africa and describe how popular notions of African development and modernity have limited our ability to see African middle classes. I examine Western-educated segments of the middle classes at the end of colonialism, and identify them as significant middling groups because of their position between supposedly 'backwards' African traditionalism and Western modernity as well as their position astride capital and labor. Because of their middling character, Western-educated middle classes in West Africa emerged as both subjects and objects of development in the transition from colonial to nation-states. I emphasize how notions of progress created by and about Western-educated West Africans focused on the imperatives of modernization and state-led development. The thesis focuses on definitions of African middle classes, notions of African modernity, and visions of national development at the end of empire. I examine social theories about middle classes in general and African class structures in particular before discussing visions of development as expressed by influential Westerneducated Africans (namely Edward Blyden, Africanus Horton, Kwame Nkrumah and Félix Houphouёt-Boigny). I point to nationalism as a unifying class project for Western-educated Africans at the end of colonialism, and underscore how Westerneducated Africans envisioned the advent of African nations as the continent's entry into the modern world. National development then appeared as a strategy for 'backwards' nations to 'catch-up', and Western-expertise was offered as an expedient way to boost growth and modernize new nations. Examples from Ghana and Côte d'Ivoire are provided throughout the thesis to illustrate general claims and to highlight variation within West Africa. At the end of colonialism, ideas about development in Ghana and Côte d'Ivoire were almost antithetical. These two countries demonstrate how differences in ideology, imperial relations, and state-led development strategies necessarily affected the size and strength of Western-educated middle classes at the end of empire. In all, this thesis highlights the power of development discourses in constructing certain images of 'African society' which, in turn, propel particular development projects. How we imagine and represent African societies has important effects. This thesis pushes the way we understand Africa's past as well as contemporary class constructions. I attempt to insert the middle classes into representations of African societies with the belief that including the middle classes will produce more accurate and realistic ideas about African development.