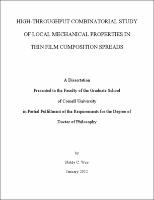 Mechanical properties such as residual stress and magnetically induced strain such as magnetostriction in thin film can be measured using singly clamped cantilevers. By having a freshly deposited film on a cantilever, residual stress can be measured by simply determining curvature of the bending cantilever beam. Likewise, the coefficient of magnetostriction can also be determined by measuring curvature of a unimorph consisted of a magnetic layer and a non-magnetic cantilever under the application of magnetic field. Such sensitive experiment can offer quantitative evaluation of the material property being investigated. By applying the curvature measurement technique to combinatorial materials science, a high-precision, quantitative instrument has been developed for measuring these properties on thin film composition spreads with unprecedented composition resolution. In this approach, the thin film composition spread is deposited on a dense array of MEMS-based prefabricated cantilevers. The curvature of the cantilevers is interrogated using an optical curvature measurement approach that is fast and precise. This system allows high-throughput local measurements of stresses in compositionspread samples. By automating the data acquisition with precise stage movements, it takes approximately 2 hours to measure 2500 cantilever curvatures, including preparation time required for registration and alignment of cantilevers, and calibration of detector sensitivity. The Fe-Ni-Al composition system is used as a case study to validate this approach. Residual stresses are measured at 1-millimeter intervals on the Fe-Ni-Al composition spread film. Since the composition spreads typically have a composition gradient on the order of 1 atomic % per millimeter, this technique enables investigation of thin film mechanical properties with 1 atomic % resolution. This measurement system has a relatively high dynamic range and high sensitivity, which can enable highthroughput investigation of a wide range of other mechanical properties, such as conventional and ferromagnetic shape-memory effects, thermal expansion coefficients, and magnetostrictive properties. To demonstrate the high sensitivity and versatility of this system, thin film magnetostriction coefficients of NiFe alloy are measured to strains as small as 0.1 parts per million. With improvement in sensitivity, this approach can also be used in measuring surface stress of ultrathin films.