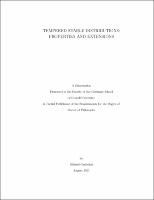 It has been observed that data often appears to be well approximated by infinite variance stable distributions in some central region, but the tails of the distribution are actually lighter. Tempered stable distributions, which were introduced in [Ros07], are a rich class of models that attempt to capture this type of behavior. We will define certain generalizations of these models, which allow for more flexible structure. We will then derive a number of important results about them. In particular, we will give necessary and sufficient conditions for when they have regularly varying tails. We will also classify the possible weak limits of sequences of tempered stable distributions, and give necessary and sufficient conditions for convergence. These two properties will help us to categorize the long and short time behavior of their corresponding Lévy processes. We also attempt to explain why such models appear in applications. The use of stable distributions is justified by the central limit theorem, which says that stable distributions are the only possible limits of scaled and shifted sums of iid random variables. While this does not apply to tempered stable distributions, we will show that they may provide a good approximation to such sums for large, but not too large, aggregation levels. We base this explanation on the prelimit theorems of [KRS99] and [KRS00]. We then generalize them to d-dimensions.