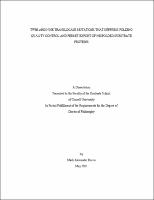 The twin-arginine translocation (Tat) pathway is a robust protein translocation system capable of transporting cellular proteins across the bacterial cytoplasmic membrane. A hallmark of the bacterial Tat pathway is its ability to export proteins that have attained a fully-folded structure prior to export. An inbuilt feature of the Tat system is a folding quality control (QC) mechanism that discriminates between unfolded/misfolded and correctly folded proteins, allowing only the latter to pass through the inner membrane. This mechanism holds great promise for biotechnology applications because it has the potential to ensure the quality and structural integrity of exported proteins. Yet, despite the significance of the Tat system, the precise mechanism by which the TatABC protein complex delivers folded proteins into the periplasm remains poorly understood. Likewise, very little is known about the folding QC mechanism. Studies from our laboratory suggest that the QC mechanism resides within the TatABC proteins. Thus, to shed more light on this enigmatic process, we implemented a directed co-evolution strategy whereby all three components of the Tat pathway were evolved simultaneously to isolate suppressors that relaxed the QC feature. Selection of suppressors was enabled by a genetic selection comprised of a poorly folded substrate protein ([alpha]3B) fused to the selectable reporter beta-lactamase (Bla). By screening recombinant libraries of the tatABC operon, we were able to isolate variants that exported previously translocation-incompetent substrates and nonnative Tat substrates. The resulting TatABC variants represent putative suppressors of the QC mechanism. Further information gained from these suppressors should provide a detailed understanding of the molecular mechanisms involved in TatABCmediated QC. Moreover, these studies demonstrate that directed co-evolution of cellular protein machinery is a viable new strategy for dissecting complicated, poorly understood multiprotein complexes in living cells.