The Greater Fools Theory And The Bubbles In Chinese Stock Market: A Behavioral Approach 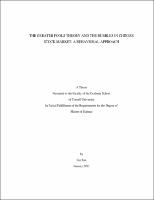 The Chinese Stock Market encountered its largest bubble from early 2006 to late 2007, and then crashed to the ground in mid 2008. On contrary to the bubbles in developed countries, the sky-rocketing phenomenon of the Chinese stock index in a very short period could not be fully explained by the rational bubble theory. In this paper, I examine both theoretically and empirically the "Greater Fools Theory", in the scope of irrational bubble theory. The result suggests that the Greater Fools Theory should be credited for this bubble in China. The theory part of this thesis presents an intuitive mathematical model to show the consistency of Greater Fools Theory to agents' behavior in reality. The empirical part of this paper adopts a traditional factorpricing model, the APT model, to show the explanation power of greater fools proxies. i