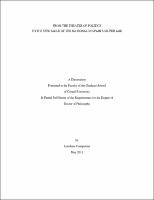 The present work examines how modern technologies of vision, representation, and display inflected modern notions and practices of political and aesthetic "representation," as suggested by the Spanish representación. Through the works of Santiago Ramón y Cajal, Federico García Lorca, and Josep Maria de Sagarra I trace the progressive intertwining of science, theater, and politics between 1906 and 1931, a period that roughly coincides with the Spanish Edad de Plata, with the democratization of the modern nation-state, with the reteatralización of Spanish theater, and with the increasing mechanization of life and work under modern conditions. The authors selected all partake in their cultural milieu and the project of nationalization of culture, yet, they also occupy a peripheral position with respect to both. Most importantly, as I demonstrate in the dissertation, they all converge in considering theatricality and the spectacular as distinctively modern modes of understanding, engaging, and constructing reality. The central argument is threefold: (1) that these authors foreground the theater and theatricality as fundamental paradigms of signification under modernity (2) that, because the theater and theatricality are rooted in the materiality of their medium (i.e., the architectural and economic apparatus as well as the body), they counter the dematerialization of the body associated with the increasing spectacularization of modern life and politics, and (3) that the body is not only the terrain where competing views are negotiated, but also the site where specificity (or imperfection) is inscribed and preserved, through representation and mediation. Given the complexity of the phenomenon under analysis, I deploy an interdisciplinary methodology that incorporates texts of philosophy, aesthetics, political theory, science and the sociology of science, history, and visual studies. Particularly relevant are old and current views on theatricality (Walter Benjamin, Susan Sontag, Alain Badiou, William Egginton) that rethink subjectivity, presence, and space in ways that resist ontological sedimentation while reflecting on the different viewer and aesthetic reception envisioned by theater compared to film or the spectacle. Also central recent (and non) investigations on the relation between science, representation, objectivity, and gender (Helen Longino, Evelyn Fox Keller, Barbara Stafford, Bruno Latour, Karin Knorr-Cetina).