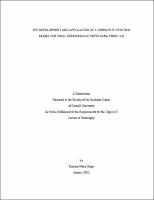 Viral hemorrhagic septicemia virus (VHSV) is the causative agent of a highly lethal, World Organization for Animal Health (OIE) reportable fish disease. With a broad host range and a long-term persistence, VHSV has become a worldwide threat, particularly to both fish farming and recreational fishing. As a result of the massive mortality events between 2005-2007 followed by disease disappearance in the Great Lakes, research began to focus on understanding the mechanisms of transmission and persistence of this new genotype of VHSV, IVb. In this study, a robust quantitative RT-PCR assay was first developed to provide a more sensitive tool to survey fish in the Great Lakes and has allowed the detection of persistent sub-clinical VHSV IVb infections throughout the region. The mechanisms of viral entry, replication, shedding, and transmission are only partially understood due to the lack of a suitable laboratory model host for VHSV IVb. A second phase of this work is the development a zebrafish model for VHSV IVb immersion infection that reflects many parameters governing infection of fish in the wild. This model has been used to evaluate temperature, dose and age effects on disease susceptibility. Using this model we have shown that VHSV IVb RNA and infectious virus are readily detected in infected postmortem zebrafish for more than 100 days at 4°C in air or water suggesting that deceased fish may contribute to viral persistence. Data are presented to show that direct physical contact with an infected host greatly enhances VHSV IVb transmission. Together data from the study will allow for a better understanding of the mechanisms of infection and transmission of VHSV IVb and provide a platform for further studies and translation to VHSV IVb transmission and pathogenesis in natural hosts.