Aristotle On The Virtues Of Slaves, Women, And Children 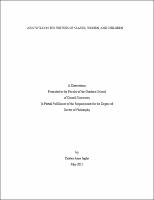 There is a puzzle about what Aristotle means when (e.g. at Pol. 1.13) he attributes virtue of character to deliberatively imperfect persons like slaves, women, and children. This is because his official ethical works (EN, EE) seem to insist that virtue requires the deliberative excellence of practical wisdom (phronêsis). If slaves, women, and children don't have the virtue that Aristotle develops at length in the ethical works, then what exactly is the "virtue" that he ascribes to them? I argue that the virtue of slaves, women, and children, while not amounting to virtue strictly-speaking, approximates such virtue in the following way (chapter 1). Start with the uncontroversial idea that virtue strictly-speaking, as a mode of rational excellence, essentially involves not only the excellence of an agent's (strictly) rational or deliberative part, but also the excellence of her non-rational part-her alogon or emotional part-qua that part's ability to "follow" or "be persuaded by" reason. Now, while slaves, women, and children lack perfect deliberative faculties and so cannot have the deliberative excellence required for virtue strictly-speaking, they can at the very least have non-rational parts that follow reason in a way, and so can have virtue that approximates virtue strictly-speaking. Such obedience of the alogon consists, I argue, in the alogon attaching to fine objects qua fine (chapter 2). To support this claim, I look at what Aristotle says about following reason. I then examine the motivational and evaluative capacities of nonrational desire and argue that appetite (epithumia) and spirited desire (thumos) can, if habituated properly, be motivated by considerations of the fine (kalon) as such (chapters 3 &amp; 4). Granting that slaves, women, and children can have non-rational desires for fine action as such, can they decide on (prohairesthai) fine action? To answer this question, I argue for an account of decision whereby it essentially arises out of reflective deliberation about the constituents of happiness (chapters 5 &amp;6). Because women can, but slaves and women cannot, engage in such deliberation, only women are capable of deciding on virtuous actions. The virtues of slaves and children do not include prohairetic motivation (chapter 7).