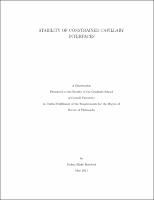 Surface tension acting at an interface holds an underlying liquid in motionless equilibrium. If the interface is partially supported, the extent and type of wettingcontact can significantly influence the stability of the equilibrium configuration. This dissertation addresses a number of questions related to the stability and dynamics of constrained interfaces subject to capillarity. The problems considered here fall into two distinct classes. The first class of problem is concerned with the extent-of-constraint and restricts to interface disturbances with immobile or 'pinned' contact lines. Here the base-state volume is taken to be 'filling', or the static interface shape intersects the surface-of-support tangentially, such as a spherical-belt or cylindrical-cup solid support. With regards to the drop under spherical-belt support, the base-state is stable, oscillations persist and the effect of the constraint is to modify the spectrum and modal structure of the unconstrained problem, as well as introduce a low-frequency mode. In contrast, a cylindrical interface is subject to capillary instability and more particularly Plateau-Rayleigh break-up, which can be partially stabilized by either a cylindrical-cup or end-plane support. Here introducing a weak-secondary curvature to the cylindrical cup-like support can either stabilize or destabilize this new family of nearly-cylindrical toroids. This is referred to as the torus-lift of the cylinder and is used in conjunction with a symmetrization procedure to prove a large-amplitude stability result for cylindrical lens-like menisci. The second class of problem is focused on the dynamics of the three-phase contact-line and also the effect of base-state volume. In considering the contactline dynamics of the sessile drop, an instability related to translational or 'walking' motion is catalogued and two types of modal crossings are observed. The first is related to contact-line mobility and relevant to experimentally-observed contactline instabilities, while the second is associated with symmetry-breaking of the hemispherical base-state. A similar 'walking' instability is observed for the static rivulet, which is shown to be related to the phenomenon of rivulet meandering. Lastly, a 'bounding' method is developed and applied to the family of catenoids to reproduce well-known stability results and generate new ones without explicitly calculating the second variation.