Free And Bound Volatiles In Wines And Grapes: Analysis, Effects Of Winemaking And Grape Growing, And Their Contribution To Wine Quality 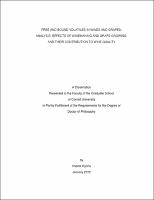 The aroma of wine is due both to volatiles present in the grapes ("free") as well as non-odorous ("bound") precursors that are released during fermentation. 3-alkyl-2-methoxypyrazines (MPs) are a well known class of free volatiles possessing an herbaceous odor. Because high concentrations of MPs can negatively impact wine quality, there is a considerable interest in reducing MP concentrations, but current enological practices lack selectivity. Unlike MPs, most wine aroma compounds exist in grapes as bound forms. Treating juices with silicone prior to fermentation resulted in a reduction of MPs by 53 to 93% without affecting the majority of other volatiles in finished wines. We also considered factors that would influence MPs during the growing season. In the field, MPs decrease during ripening, but the degradation pathway is not well defined. We hypothesized that the 3-isobutyl-2-methoxypyrazine (IBMP) is degraded to its hydroxyl form (IBHP), based on an inverse correlation of the two compounds in bell peppers (R2=0.958) and Cabernet Franc grapes (R2=0.998) during ripening. Most key odorants in wine cannot be detected in grapes because they exist in bound forms such as glycosides. The behavior of glycosides during ripening is still not well understood, even though this knowledge is important for determining optimum harvest time and providing insights into grape biochemistry. Following acid hydrolysis to release the aroma from the bound precursors, we tracked the behavior of three major glycoside classes during grape maturation in 2009 and 2010 seasons. Monoterpene and C13 norisoprenoid glycosides both increased during maturation, but monoterpene glycoside accumulation occurred ~2 weeks later. The behavior of benzenoid glycosides was inconsistent. Hedging - a common viticultural practice - resulted in no significant impact on glycosides at harvest.