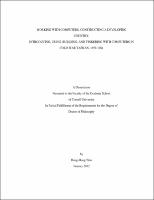 This dissertation uses a developing country's appropriation of mainframe computers, minicomputers, and microcomputers as a lens for understanding the historical relationships between the digital electronic computing technology, the development discourse underlying the Cold War, and the international exchanges of scientific and technological expertise in the context of the Cold War. It asks why and how, during the Cold War, Taiwanese scientists, engineers, technocrats, and ordinary users-all in a so-called developing country-introduced digital electronic computing to Taiwan and later built computers there. To answer the why question, I argue that these social groups' perceptions of Taiwan's developmental status shaped their perceptions of the importance of possessing, using, and manufacturing computers. As for the how question, I propose that Taiwanese computer users modeled their practices after the existing successful practices of using mainframe computers and later started to build and tinker with minicomputers and microcomputers. The beginning chapter of this dissertation discusses that a group of Taiwanese engineers, technocrats, and scientists advocated the introduction of 'electronics science' and digital electronic computing from the United States to Taiwan for expanding the industrial sector of Taiwan's economy in the late 1950s. Their efforts resulted in a UN technical-aid program, in which National Chiao-Tung University's (NCTU) professors, students, and technicians worked with two US visiting professors to set up a computing center, equipped with an IBM 650 and an IBM 1620 computer, at the NCTU campus from 1962 to 1964 (chapter 3). Chapter 4 analyzes how, in 1964, a Cornell econometrician relied on NCTU's 1620 computer to form an economicplanning project for a Taiwanese government agency. Chapter 5 discusses a project in which a NCTU graduate program planned to build a minicomputer from scratch from 1968 to 1971, despite being able to buy a minicomputer from various US suppliers. Chapter 6 explores two intriguing phenomena that surfaced between 1980 and 1984: why many of Taiwan's computer users preferred to build their own microcomputers and how this preference initiated a series of debates about whether legal institutions allowed Taiwanese companies to make Apple compatibles.