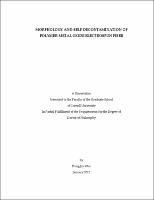 TiO2 and MgO were investigated as self-decontaminating catalysts on a fibrous substrate. A photo-oxidation mechanism with UV energy resulting in strong oxidation by TiO2 was demonstrated by degradation of a carbamate pesticide. In contrast, MgO functioned through surface destructive adsorption and thus did not require exposure to UV radiation for self-decontamination to occur. Regarding to the effect of fiber morphology, two types of morphology were studied: Core/sheath fiber and continuous porous fiber structure were formed in electrospinning. In the core/sheath approach by coaxial spinning, a higher density of nanoparticle distribution in the surface region was observed when compared with the uniaxial approach, which means the probability of interaction between TiO2 and toxin increased. The core/sheath structure with a higher particle concentration in the sheath provided more rapid initial degradation of toxin and the photocatalytic reaction of core/sheath morphology showed second-order behavior. It was also observed that the fibers containing higher content of TiO2 degraded more pesticide for both uniaxial and coaxial fibers. Aside from the selective location of nanoparticles to the fiber surface, interconnected porous morphology was studied. With varying the ratio of solvents, different morphologies were observed in electrospun fibers. A polymer solution consisting of An/Ac 60/40 and 15 wt % of CA/PEO 60/40 (80/20 in moles) enabled the highest degree of continuity (0.77) of PEO phase in CA matrix during the electrospinning. The interconnected intra-fiber pores (89 nm width) and large surface area (21.8 m2/g) were observed at the electrospun fiber fabricated with the above composition. A catalyst incorporated substrate of the nanochanneled fiber contained MgO was investigated as a methyl parathion removal membrane. In both a soaking test and a membrane filtration, the MgO loaded highly channeled fiber was observed to remove more amount of MP, which resulted from the physical adsorption and destructive adsorption. MP was suggested to be adsorbed and removed from solutions by the exposed MgO particles in fiber and the adsorption to porous fiber. The advantage of the channeled morphology over the conventional regular surface in fiber was showed up in a membrane filtration process. SEM, DSC, TGA, XRD, a BET instrument, and HPLC were used to confirm the morphology, chemistry, and removal performance.