Land, Power And The Production Of Agriculture In Tanzania And Uganda 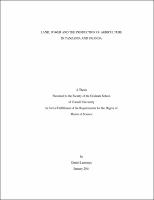 In 2007 the World Bank released the World Development Report 2008: Agriculture for Development signifying a reinvigorated interest in sub-Saharan Africa‟s agricultural crisis (World Bank 2007). As part of the debate, frenzied calls were made for more fertilizer application, better technology and water irrigation in the agricultural sector. Within this debate, communal forms of land tenure were faulted for causing tenure insecurity, inhibiting land collateralization, and frustrating agricultural investment and ultimately agricultural productivity. Using data from Tanzania and Uganda this thesis critiques the terms of this debate and the premises upon which a link is made between communal forms of land tenure and agricultural failure. The major point of departure for this thesis arises from the ways in which historical and political dimensions of the agricultural crisis are absent within current efforts aimed at resolving the agricultural crisis, which have dissolution of communal land tenures at their center. I argue it is through the historical experience of Tanzania and Uganda that there has emerged a social and political institutional apparatus that has led to a pro-export and anti-food crop agricultural regime; an agricultural dualism that has favored export crops over food crops. This agricultural dualism, I show, is an outcome of transformation in social and political relations at national and local levels, themselves outcomes of how nation states are embedded within the larger global economy. In order to demonstrate the ways in which political and social transformation have contributed to this agricultural dualism, I will situate land use and agricultural production historically, making specific reference to how social relations and political power have shaped how land is owned and used in Tanzania and Uganda. In addition, by situating their land tenure and land use historically I will expose the institutional, political and social context that contributes to anti-domestic food crop on one hand and pro-agricultural exports on the other. Ultimately, I transcend the simple and quick technological solutions advocated by modernists and to privilege sociological tools in understanding and resolving the crisis in the agricultural and food systems of Tanzania and Uganda.