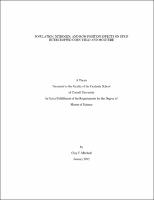 For commercial grain farms, recent availability of corn (Zea mays L.) and soybean [Glycine max (L.) Merr.] with the same herbicide tolerance, and survey-quality automated navigation systems for agricultural equipment reduce the operational cost of strip intercropping the two species. Field experiments were conducted in Northeast Iowa to determine the effects of strip intercropping on corn grain yield and moisture, and to identify interactions with row position, plant populations (58 000, 80 000, and 108 000 seeds ha-1), and sidedressed N rates (0, 90, 130, and 160 kg N ha-1). Four strips were each divided into three 260 m sections and in each strip populations were randomly assigned to sections. Nitrogen rate was randomly assigned within each section to subunits consisting of 3 adjacent rows such that each N rate appeared at each row position for each population. Rows were harvested individually and analyzed in adjacent 3-row triplets. In a dry year, 2006, sidedressing had no effect and the mid population was highest yielding. In the wet year, 2007, the zero N rate had reduced yield and moisture, and yield was highest for the highest population. Outside rows yielded more and were dryer, but row position did not interact with other treatments. We recommend that in strip-intercropped corn, population and N levels are applied uniformly across all rows and that N applications are split to allow for adaptation to the weather.