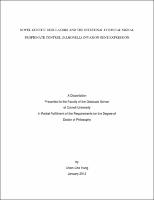 Salmonella is an important enterobacterial pathogen causing diseases ranging from mild enteritis to severe systemic infection. To cause disease, it needs to invade the intestinal epithelium using genes encoded within the Salmonella pathogenicity Island 1 (SPI1), which comprise a type III section system (TTSS) to translocate effector proteins into host cells. In this thesis, we investigated the effects of three novel genetic regulators FliT, Pat, and CobB, and the intestinal chemical signal propionate on SPI1. Further, we used molecular and genetic approaches to study the associated mechanisms by which these internal genetic elements and the external signal propionate control Salmonella invasion. SPI1 gene expression has been shown to be controlled by complex interrelated regulatory networks and involves numerous regulators inside and outside SPI1. Using a random transposon mutagenesis strategy, we discovered that a novel genetic regulator FliT, encoded within the fliDST operon, can negatively control SPI1 gene expression. Since FliT is known to be a negative regulator of the flagellar regulon, we used genetic approaches to investigate the roles of additional flagellar regulators controlled by FliT in the repression of invasion. We found that deletion of flhDC or the flhDC-regulated gene, fliZ, completely abrogated the negative effect of FliT, suggesting that FliT controls Salmonella invasion through this flhDC-fliZ route. Our previous studies have shown that propionate, an intestinal short chain fatty acid found predominantly in the large intestine, represses SPI1 gene expression. To further understand the mechanism by which propionate represses Salmonella invasion, we examined the importance of intestinal pH in this repressive effect, and investigated the metabolic and genetic pathways required for this fatty acids to control SPI1 gene expression. We found that the repressive effect was observed at mildly acidic, physiologically relevant pH, but not under alkaline conditions, suggesting that propionate must enter the bacterial cytoplasm to have its effects. Additionally, we found that metabolism of propionate is essential for its repressive effect, and the high-energy metabolic intermediate propionyl-CoA is apparently required. Using genetic approaches, we also found that the repressive effect of propionate is through the central SPI1 regulator hilD. However, propionate control of HilD is through neither transcription nor translation, suggesting a post-translational modification of HilD may be required for regulation. Previous studies have shown that Pat and CobB act as post-translational regulators and control the function of their targets through N-lysine acyl modification. Interestingly, the known targets of Pat and CobB in Salmonella are PrpE and Acs that play roles in fatty acid (propionate and acetate) metabolic pathways. As the intestinal short chain fatty acids are known to affect SPI1, we examined whether Pat and CobB affect Salmonella invasion. We found that Pat and CobB were able to repress and induce SPI1 expression, respectively, when over-expressed. However, using genetic approaches, we demonstrated that their effects on invasion were not through their known targets PrpE and Acs. Instead, HilD and Lon are required for their control on SPI1. These results suggest that Pat and CobB may work through the modification of HilD and its subsequent degradation by Lon protease, and consequently may affect SPI1 gene expression.