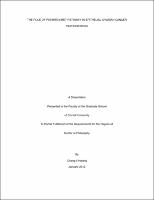 The miR-34 family is directly transactivated by tumor suppressor p53, which is frequently mutated in the majority of human cancers, including epithelial ovarian cancer (EOC). MET receptor protein tyrosine kinase is one of the common targets of miR-34 family. MET activation is frequently implicated in increased motility and invasion of cancer cells and is associated with poor prognosis of EOC patients. However, it remains uncertain if dysregulation of p53/miR34/MET signaling pathway plays an important role in EOC pathogenesis. During our studies, we have found frequent downregulation of miR-34 in human EOC. Reduced expression of miR-34 family was associated with p53 mutations, promoter methylation and copy number variations. At the same time, levels of miR-34a and MET expression were inversely correlated in EOC specimens. miR-34 reconstitution in p53 deficient ovarian cancer cells resulted in reduced proliferation, motility and invasion, the latter of which was dependent on MET expression. Consistently, we were able to find an increase of MET expression in the mouse ovarian surface epithelium after conditional p53 inactivation, resulting in increased cell motility and invasion. Concomitant inactivation of Met and p53 abrogated this feature, suggesting that MET activation was responsible for p53 control of cell motility and invasion. In addition to miR-34dependent regulation of MET, we also identified miR-34-independent mechanism, in which p53 inhibits SP1 binding to MET promoter. miR-34-dependent and -independent mechanisms are iii    not functional in p53 absence, while mutant p53 proteins retain partial MET promoter suppression. Accordingly, MET expression, cell motility and invasion were particularly high in p53 null cells, as compared to cells expressing mutant p53 protein. This finding may provide a mechanistic explanation to reports of poorer prognosis of patients with p53 null EOC as compared to those expressing mutant p53. In order to further explore the role of miR-34 family in development and carcinogenesis, mice carrying conventional and conditional targeted mutations of mir-34 genes were generated. mir-34a-/- mir-34b/c-/- mice are viable and exhibit phenotypes not typical for those associated with p53 null background. Specifically, mice do not develop early onset lymphomas but manifest hypoplasia of the white pulp in the spleen, accelerated thymic aplasia, focal hyperplasia of Purkinje neurons and ulceration of the forestomach, indicating miR-34 importance for a number of biological processes. Loss of mir-34 resulted in increased cell proliferation, similar to that after p53 loss. However, unlike p53 deficiency, lack of mir-34 did not increase induced pluripotent stem (iPS) cell reprogramming efficiency, suggesting that p53 may affect reprogramming by other mechanisms, in addition to increased proliferation. Our observations that mir-34b/c deficiency caused radioresistant phenotype after 15 Gy ionizing radiation also indicate that miR-34 role in DNA damage response is distinct from that of p53, Taken together, we have shown that p53/miR-34/MET signaling pathway plays an important role in human EOC. Furthermore, we have identified miR-34-dependent and miR-34independent mechanisms of MET regulation by p53 and determined that existence of such mechanisms may explain uneven patient prognosis as a function of p53 mutation type. Finally, generation of mir-34 deficient mice allowed us to determine new biological functions of miR-34 during development and DNA damage response, laying ground for future studies aimed to reveal miR-34 roles in development, DNA damage response and carcinogenesis. iv