Suspended Sediment Concentration And Discharge Relationships In The Ethiopian Highlands 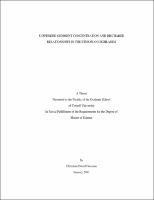