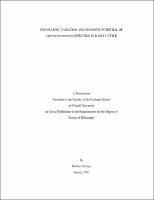 Cryptosporidium parvum is a zoonotic protozoan parasite that produces lifethreatening infection in people with compromised immune systems, and causes significant economic losses to the dairy industry due to morbidity in calves. The overall objective was to quantify and characterize the risk associated with zoonotic C. parvum infection in cattle, so that cost-effective intervention strategies may be implemented to mitigate the public health risk and to reduce economic losses. To that aim, four complementary studies were implemented, incorporating epidemiologic analytic approaches, geographic information system analyses and molecular techniques. A series of cross-sectional studies were conducted using molecular genotyping methods to obtain species-specific estimates of the prevalence of Cryptosporidium in dairy cattle, and to investigate seasonal variations in prevalence. The empirical prevalence estimates were validated using a stochastic Bayesian approach. Subsequently, the crude and Bayesian risk estimates were used to investigate the spatio-temporal dynamics of C. parvum infection on dairy farms in an important watershed with various cluster detection methods. In addition, a case-control study was conducted applying uni-, and multivariable unconditional logistic regression analysis to determine the association between host, management, geographical, and meteorological factors and Cryptosporidium genotype. Finally, to investigate the global zoonotic risk of Cryptosporidium, our group collaborated with the University of Nairobi to identify Cryptosporidium genotypes from feces collected from urban and peri-urban dairy cattle in Nairobi to determine their zoonotic potential. Both empirical and stochastic methods revealed a summer peak in the prevalence of C. parvum in pre-weaned cattle. Empirical risk estimates highlighted both temporal and spatial clusters of C. parvum infection in a major watershed. Herd size, hay bedding and precipitation were significant risk factors associated specifically with the zoonotic genotype in calves. Cryptosporidium ryanae, a non-zoonotic genotype was found in pre-weaned calves in peri-urban Nairobi. The findings of these studies will be useful to design control measures that reduce animal exposure and economic losses associated with C. parvum infection in cattle herds, and protect drinking water supplies by decreasing watershed contamination with this parasite.