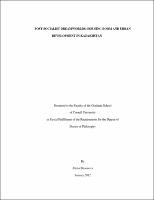 This dissertation is based on 26 months, between 2007 and 2010, of official noncontinuous ethnographic fieldwork in real estate development in Kazakhstan. During this time, I investigated the institutionalization of new housing "dreamworlds" and new modes of being urban in relation to the practices of government bureaucracy, the practices of the construction industry, and the housing strategies of residents. Even before the commencement of my fieldwork, I had personally socialized with people who moved into and made their homes in the newly built housing complexes of Astana. Drawing on my participant observations, research, and personal engagements with policy-makers, businessmen, and residents, I have written what can be called an anthropology of the boom (an exploration into the socio-economic conditions and forces behind the recent housing boom in Kazakhstan) an anthropology of the emergence of a new material environment, as well as an anthropology of the new social configurations and normative framework arising from the new material conditions. I have also followed some of the institutional developments that took place during the period of my fieldwork and earlier - during the "boom" period of the first decade of the 21st century. These developments chiefly include the planning and building of the new capital, Astana, the housing boom and post-crisis management of the construction, the rise and fall of construction companies, and the trajectories of state housing policies of that period. After the financial crisis of 2008, much like the United States and countries in Europe, the state in Kazakhstan also had to deal with the excesses of the boom period having to play a particular role in mitigating the financial crisis - bailing out banks, companies, and individual home owners threatened by bankruptcy and foreclosure. The necessity to design effective yet socially acceptable anti-crisis policies opened up the political space in unexpected ways: during the recent crisis, questions of "moral economy," moral legitimation of wealth, social value and social needs have been creeping back into the public discourse. Put bluntly, in a time of crisis, somebody has to lose, and often it is up to politics to assign moral blame and decide who should lose.