Syllable Nucleus And Margin In Greek, Vedic, And Proto-Indo-European 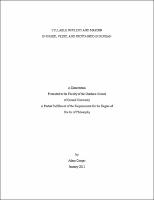 This dissertation advances the dialogue between two oftentimes disjointed subfields of language study: historical Indo-European linguistics and theoretical phonology. From a perspective that is simultaneously empirical, theoretical, and historical in nature, its goal is to develop updated analyses of key aspects of syllable structure in the sound systems of the ancient Indo-European languages and the proto-language itself. The dissertation comprises two parts. The subject of Part I is the syllable nucleus: in particular, we develop a new Optimality-Theoretic analysis of Proto-Indo-European sonorant vocalization, whereby sonorants become syllable nuclei to enable the syllabic parsing of otherwise unsyllabifiable strings of segments, but remain consonantal otherwise. Additionally, when two sonorants are in sequence and neither is vowel-adjacent, the second consistently vocalizes, regardless of which is more sonorous, as in Meillet 1937, later formalized in Schindler's (1977) rule-based account. Our analysis provides a comprehensive account of the data, improving upon previous Optimality-Theoretic analyses. Furthermore, we also take steps to more explicitly position Proto-Indo-European within a typology of languages with syllabic consonants. The subject of Part II is syllable margins. We first reevaluate the evidence for and against medial consonant cluster syllabification in Vedic Sanskrit, reconfirming the traditionally posited heterosyllabic treatment VC.CV. We then develop an analysis of this treatment, one which, in view of data from 'perfect union vowel' epenthesis, compels us to reconsider the notion of locality in Pater's (2009) constraint indexation approach to morphologically-conditioned phonology. Moving beyond Vedic, in the interests of reassessing the reconstructed state-ofaffairs in the proto-language, we consider evidence from the development of Ancient Greek and evaluate the reconstructed Proto-Indo-European syllabifications VOO.RV, VR.OOV, ultimately demonstrating the difficulty of capturing both of these treatments in one and the same account. Finally, uniting the foci of Parts I and II, we address the compatibility of the righthand vocalization of sonorants on the one hand, and the treatment VC.CV on the other, and develop a unified analysis capable of generating both.