Anaerobic Biodegradability Of Complex Substrates: Performance And Stability At Mesophilic And Thermophilic Conditions 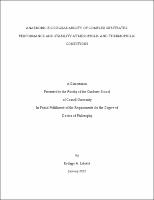 Performance and stability of the anaerobic digestion of complex substrates was investigated in three separate studies. First, an array of materials was subjected to the biochemical methane potential (BMP) batch assay to evaluate the influence of the substrate's characteristics on the biomethane potential and overall biodegradability. The applicability of stoichiometry-based methods for predicting biomethane yields of complex substrates was also assessed. Results showed that, readily-degradable carbohydrates and less-degradable, but high energy-density lipid-rich substrates produce higher biomethane yields than recalcitrant, low energy-density lignocellulosic materials. Also, when substrate biodegradability was accounted for, p redicted biomethane yields were within 10% of those obtained via the BMP assay. In the second study, biodegradability and biomethane potential of the main biomolecules comprising composite substrates were determined at mesophilic and thermophilic temperatures using the BMP assay. Also, stabilization of individual constituents of co-digested substrates was investigated using continuously-stirred anaerobic digesters (CSADs) operated at either temperature. Lastly, the feasibility of using either BMP data or stoichiometry-based methods to predict substrate stabilization and biomethane yields of semi-continuously-fed CSADs, was evaluated. Results revealed that, with the exception of starch, lignin, and lipids at inhibitory concentrations, most biopolymers are biodegradable under both thermal ranges. As previously reported, biodegradability (and biomethane potential) of lignocellulosic substrates is correlated with their lignin content. Finally, a methodology to estimate the biodegradable fraction based on the chemical composition of substrates was developed. Results were between 5% and 18% of those observed at steady-state conditions; differences using the BMP assay were within the same range. Lastly, the influence of the operating temperature and substrate chemical composition on performance and stability of anaerobic digestion was evaluated. At shorter hydraulic retention times (HRTs) and high manure-to-dog food ratios, the thermophilic CSAD outperformed the biomethane production rates and substrate stabilization of the mesophilic CSAD. Mesophilic digestion appeared more stable regardless of the HRT and substrate composition. The thermophilic CSAD was less stable, particularly at low lipid-to-manure ratios, and more sensitive to changes in environmental and operating parameters, i.e., temperature and mixing intensity.