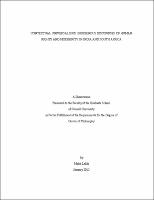 DISSERTATION ABSTRACT Contextual Universalisms investigates the "universal" ideas and values that define Enlightenment humanism-- such as secular rationality, individual freedom, and the capacity for democratic thought-and argues that these notions are also instantiated within colonized cultures relatively independently from European versions of these concepts, in context-specific forms. I explore marginalized articulations of these values, and the discourses of human rights they develop, through Indian and South African literatures. I probe these indigenous manifestations of "universalisms," or "modern" constructs through which cultures define humanity, by focusing on exemplary literary texts from the Global South that show how theoretical and philosophical notions of universal humanity and "human rights" have been developed. They reveal that these ideas are not colonial imports, or even products of the colonial encounter, and that they become self-evident through context-specific forms of local literary traditions. Furthermore, the subaltern authors of these texts reflect and produce a grassroots populism that defines itself through "indigenous" universalizing notions of rights. They create movements of popular resistance through distinct local and intellectual cultures and institutions very different from those used by colonialists or even by hegemonic nationalist groups in their own societies. The recognition of "modern" humanist values in indigenous texts as both "contextual" and "universalizing" revises previous understandings of colonized societies as "pre-modern" and of modernity as a European import. Instead, these "contextual universalisms" testify that the discourse of European colonial modernity is not the only discourse of modernity through which to view the colonial past, thereby rethinking current ways of reading Anglophone Indian and South African texts. Indeed, these indigenous literatures redefine modernity as a descriptive word for any period of radical rupture and resistance against past orthodoxies, a way of questioning the present that insists on a radical humanism. In doing so, these texts destabilize widely accepted scholarly binaries between "tradition" and "modernity," and the "religious" and the "secular," suggesting that modern ideals may well have a more complex history than is often imagined.