Hydrology, Hydrochemistry And Implications For Water Supply Of A Cloud Forest In Central America 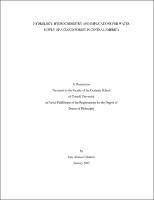 Cloud-forest ecosystems are important sources of water supplies for the expanding cities of Central America. Surprisingly, few stream flow records are available for watersheds in Central America which has a climate with distinct wet and dry periods. Consequently, the tropical hydrology of cloud-forest watersheds is not well studied. To contribute to the understanding of the hydrology of this important ecosystem and to narrow the knowledge gap of tropical hydrology with that of temperate zones, we instrumented four neighboring catchments, located within La Tigra National Park in Central Honduras. This experimental watershed site is part of the headwater catchment of the Choluteca River Basin which drains into the Pacific Ocean. Although rainfall increased with the elevation gradient, it could not explain the greater water yield from the cloud forest watershed compared with the neighboring three watersheds at lower elevations. Additionally, analysis of the stream flow records suggests that subsurface flow paths are the primary mechanisms in all watersheds. Baseflow and interflow were greater and lasted longer for the cloud forest watershed. Any direct runoff was originated from saturated areas or from rock outcrops. Statistical analysis (MANOVA) of the of the stream flow chemistry confirms that the cloud forest watershed has a longer residence time because all the elements linked to parental material (Ca, Mg, SO4-S, Na, and SiO2-Si) had significantly lower concentrations in the cloud-forest watershed than in the non-cloud-forests watersheds. On the other hand, most elements associated with the immediate effect of rainfall events such as Dissolved Organic Carbon (DOC), nitrates, potassium, phosphorous, and iron were not significantly different between the four watersheds. Finally, using a simple water balance model we were able to simulate the observed daily discharges with the Nash Sutcliffe model efficiency index ranging from 0.67 to 0.91. The cloudforest watershed had a distinctly smaller amount of available plant water and greater groundwater storage than the three non-cloud forest watersheds. This result is similar to the results obtained for an undisturbed paramo system in the Andes of South America. Consequently, protecting cloud-forests to maintain hydrologic processes overtime is critical for the sustained provision of clean water for the growing population of Central America. Key Words: Central America, concentration, hydrologic modeling. cloudforest, watershed hydrology, solutes