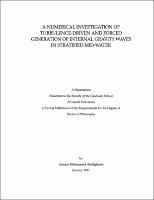 Natural and externally-forced excitation of internal gravity waves in a uniformly stratified fluid have been thoroughly investigated by means of highly resolved large eddy simulations. The first part of the thesis focuses on the generation of high frequency internal gravity waves by the turbulent wake of a towed sphere in a uniformly stratified fluid. We have used continuous wavelet transforms to quantify relevant wavelength and frequencies and their spatial and temporal dependence in the near field of the wake. The dependence on Reynolds number and Froude number of the internal wave field wavelengths, frequencies and isopycnal displacements are reported for the first time. The initial wavelengths and decay rates show a dependence on both parameters that can not be explained on the basis of impulsive mass source models. The results also clearly identify Reynolds number as the main driver for the observed selection of a narrow range of wave phase- line-tilt-angles and shed some light on the coupling of the waves and turbulent wake region at high Reynolds number. Finally, the potential for nonlinear interactions, instability and breaking of the waves increases with both Reynolds and Froude numbers. The results of this part of the thesis motivate future theoretical investigations into the underlying generation mechanisms and improved parametrization of the role of small scale processes, such as high frequency internal gravity waves, in large scale circulation models in the ocean and atmosphere. In the second half of the thesis, we have focused on the generation of an internal gravity wavepacket by a vertically localized transient forcing. We have found that the unique combination of strong vertical localization and large wave amplitude, typically not considered in the literature, lead to the formation of strong horizontal mean flow inside the wave forcing region that nonlinearly grows at the expense of a depleted and structurally modified emerging internal wave packet. A novel theoretical analysis is developed which can explain the underlying mechanism for the formation of the mean flow. By appealing to scaling arguments, based on a one way wave-mean flow interaction, we quantify the mean flow dependence on the input parameters. By means of a phase averaging procedure, we offer additional insight on mean flow reduction through horizontal localization of a wavepacket. Finally, mean flow containment techniques that allow the generation of a well-defined wavepacket that preserves its structure near the source and during the propagation towards a remote interaction region are proposed and tested. The efficiency of the techniques is tested in a simulation of internal gravity wave-shear flow interaction near a critical level. The simulations qualitatively agree with previous numerical investigations of such flow.