The Yuanmingyuan As Collective Memory: The Re-Presentation And Consumption Of History In Late 20Th Century China 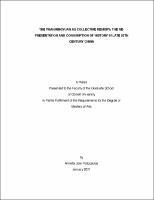