Inbreeding and Potential for Evolutionary Rescue after Environmental Change 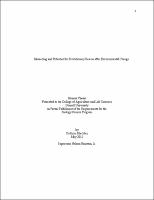 Evolutionary rescue occurs when populations that experience a severe decline in numbers following environmental change adapt evolutionarily and so avoid extinction. However, low population size, even without extinction, can have detrimental effects such as inbreeding depression that may influence the likelihood of evolutionary rescue. The aim of this study was to determine the effect of inbreeding on the propensity for evolutionary rescue. The monogonont rotifer Brachionus plicatilis was used as the study species and environmental change was created by increasing the salinity of its medium. All rotifers used in my study were originally derived from a laboratory stock culture that had been previously forced to a population genetic bottleneck with some lineages then maintained clonally while others were induced to sexual reproduction which led to inbreeding. Populations were later subjected to the environmental change and their resulting mortality and growth during recovery were observed. Inbreeding was found to significantly decrease the ability of the populations to recover from the environmental stress.