Can a Text Message Influence Our Perceptions of the Physical World?: Text Messaging as a Prime for Social Support 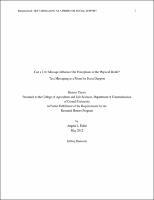 Previous research has found that a psychosocial resource, social support, affects a person’s perception of physical burdens, particularly the steepness of geographical slants. In fact, there is a decrease in the perceived steepness of a geographical slant when a person is in the physical co-presence of another person or after an extended period of visualization of a supportive other. The present study replicated and extended previous findings to test whether the brief activation of a supportive other by sending a text message to them affects subsequent judgments of a geographical slant. Participants who sent a text message to a friend judged a hill to be less steep than did those who were in the physical co-presence of a friend. Even after controlling for relationship duration and strength, a media effect remained. This suggests that a text message serves as a purer prime to activate the idea of a supportive other, which includes the qualities that are most relevant to the task at hand. In comparison, the prime of a physically co-present friend may elicit a broader array of qualities that might or might not be useful to the task at hand, thus diluting the effectiveness of the prime overall.