Ware, Barlow
JavaScript is disabled for your browser. Some features of this site may not work without it. 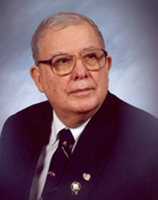 (William) Barlow Ware (1925–2011), the consummate Cornellian, was remembered fondly in two ceremonies in Ithaca on February 5, 2012. At St. John’s Episcopal Church he was eulogized for his dedicated, exemplary service to students and alums of Cornell University, the Ithaca Rotary Club, and St. John’s Episcopal Church. But his devotion to his mother, to the Cornell Glee Club, to the Cornell athletics program, especially as hockey and football announcer, and to his caregivers and other friends at Bridges were of particular significance to him. Four friends (William Rideout, John C. Nicolls, Susan H. Murphy & George Gull) presented remembrances. The Cornell Glee Club members, past and present, rendered traditional Cornell music in his memory. An informal celebration of Barlow’s life was held immediately following the service at the Hall of Fame Room in Schoellkopf Hall. Both events were captured on video so his many Cornellian friends might share this remembrance. Supplementary resources plus video and audio versions for mobile devices (and for computers equipped with QuickTime or Windows Media Player) are provided. Running times: 102 and 44 minutes, respectively.